Environmental affairs are an important aspect of discussion in the society and Reykjavik Energy’s performance and that of its subsidiaries in this field is therefore important. The goal of Reykjavik Energy is to reduce the carbon footprint of its operations by 60% between 2015 and 2030.

The Reykjavik Energy Group has focused on managing and publishing information about greenhouse gas emissions from its operations, as set out in sections on climate issues. Carbon indicators are published and hopefully they will help to contextualize the organization’s carbon emissions, including in relation to other organizations.

The Reykjavik Energy Group has set itself the target to reduce the greenhouse gas emissions from its operations by 60% between 2015 and 2030 by reducing direct emissions from activities such as the reinjection and sequestration of carbon dioxide in rocks and the electrification of the company’s car fleet. There are also plans to reduce emissions through the utilisation of carbon dioxide, see graph. Emission calculations are according to the Greenhouse Gas Protocol – Corporate Accounting and Reporting Standard.

The sequestration of carbon dioxide in rocks at the Hellisheidi Geothermal Power Plant, which started in mid-2014, is the main driving force behind the reduction in the Group’s carbon footprint. In 2018, the percentage of reinjected carbon dioxide from the Hellisheidi Geothermal Power Plant amounted to about 35% of emissions from the plant. In December, the executive board approved measures to offset the carbon emissions from the Group’s car fleet in 2018 through the reclamation of wetlands on behalf of the Wetlands Fund, see graph. 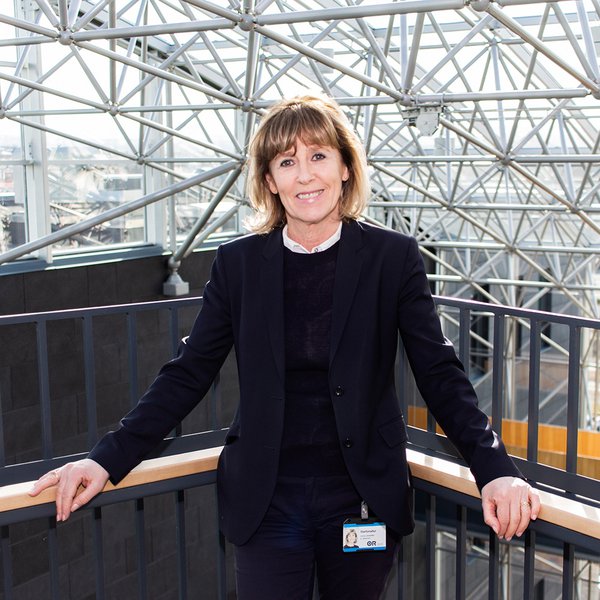 Unnur is a nurse who has worked in the field of occupational health at the Reykjavik Energy Group for six years. One could say that safety awareness is in her blood because her grandfather Thórdur was a government Director of Public Safety. In her work, she performs a variety of tasks, which are all aimed at improving the health and safety of her colleagues, since few things matter more. Unnur dabbles in numerous activities outside work: she travels to exotic countries, cultivates her garden, tends to her four sons and their families, in addition to which she is a passionate shoe collector. However, she’s often in the same shoes.

Reykjavik Energy operates a water utility, hot water utility, electricity utility, sewerage system and fibre optics network for a large portion of the population and has undertaken a mission to reduce the carbon footprint of its utilities, which is a prerequisite for a sustainable society. The Reykjavik Energy Group has set itself the goal to reduce the carbon emissions of its operations by 60% between 2015 and 2030. See more details on Reykjavik Energy’s climate change objectives in the chart and the progress it is making in achieving them in the appendices. 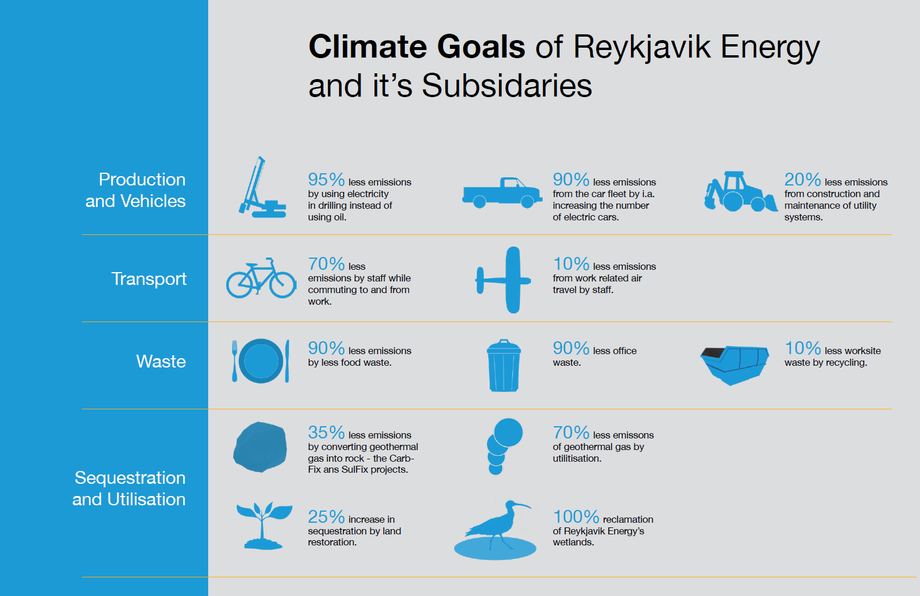 In 2018, scope 1, or direct emissions from Reykjavik Energy Group’s core operations, amounted to 43,000 tons of CO₂ equivalents. The emissions are from the geothermal power plants of ON Power, due to the production of electricity and hot water, and the production of geothermal energy to heat homes in the low-temperature fields of Veitur Utilities, which are estimated to be virtually non-existent, from HFC substances in Veitur Utilities’ system and from the car fleet and premises of the Group. Scope 2 - indirect emissions due to the use of electricity and heat in the core operations of the Reykjavik Energy Group, was none as the Group is producing electricity into the national grid and the emissions is already accounted for in Scope 1. Therefore, in order to prevent double counting, no emissions are specified in Scope 2. Scope 3, indirect emissions from waste produced by the core operations of the Group, as well as staff travelling to and from work and air travel, amounted to 1,100 tons of CO₂ equivalents. Greenhouse gas emissions from the Reykjavik Energy Group make up about 1% of total emissions in Iceland based on the total emissions recorded in 2016 (Environment Agency of Iceland, 2018).

Scope 2 - Indirect emissions: Energy usage i.e. electricity and heating for own use and transmission loss in distribution systems. Included in Scope 1, as accounted for the Group.

Carbon intensity is understood as the level of carbon emissions relative to each operating unit, e.g. income, production units, etc. Based on the revenue and size of the premises of the Reykjavik Energy Group, the Group’s carbon intensity has contracted since 2015. 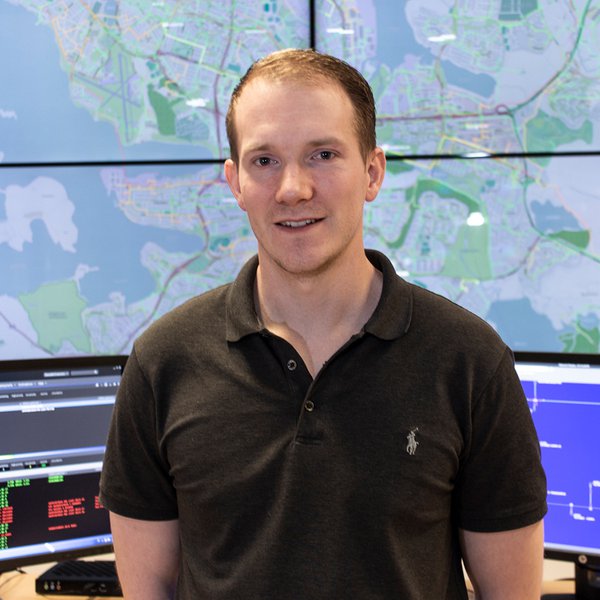 Hendrik bears an honourable title which basically means that he’s a nerd, who is highly interested in artificial intelligence and the fourth industrial revolution. He intends to take Veitur Utilities into a smart future. His education reflects his interests, since he has a degree in high-tech engineering and a masters in electrical engineering. Hendrik’s family tree is linked to Veitur Utilities; his grandfather was a contractor who made many of the district heating tanks that Veitur Utilities uses today.

The Reykjavik Energy Group produces renewable energy, electricity and hot water, from geothermal energy and hydroelectric power and uses itself about 9% of the produced electricity and about 1% of the produced hot water. Fossil fuels, particularly diesel oil, are used directly in connection with the production and operations of Reykjavik Energy Group. In order to reduce the direct use of energy due to transport related to the operations of the Reykjavik Energy Group, a schedule until 2030 has been established to upgrade the car fleet with vehicles that run on climate-friendly fuel as much as possible, see annex. In order to be able to compare the information, the primary energy consumption is expressed in megajoules (MJ), see table.

The Group’s own use of electricity is solely to produce hot water, the pumping of sewage, hot and cold water, and the operation of premises. Own use of electricity in relation to the size of the premises has generally increased from 2015 and own use of hot water has remained the same. However, the energy consumption per number of employees has decreased. Fossil fuel consumption per employee was lower in 2018 than in 2015, see table. For the information to be comparable, the primary energy consumption is expressed in megajoules (MJ).

The Reykjavik Energy Group produces renewable energy, electricity and hot water for district heating, by utilising geothermal energy and hydro power. Part of this energy is used by the Group for its own operations. The main energy source that is used in operations is electricity. Percentage of renewable energy is 99,9% of total energy use. For the information to be comparable, the primary energy use is expressed in mega joule (MJ). 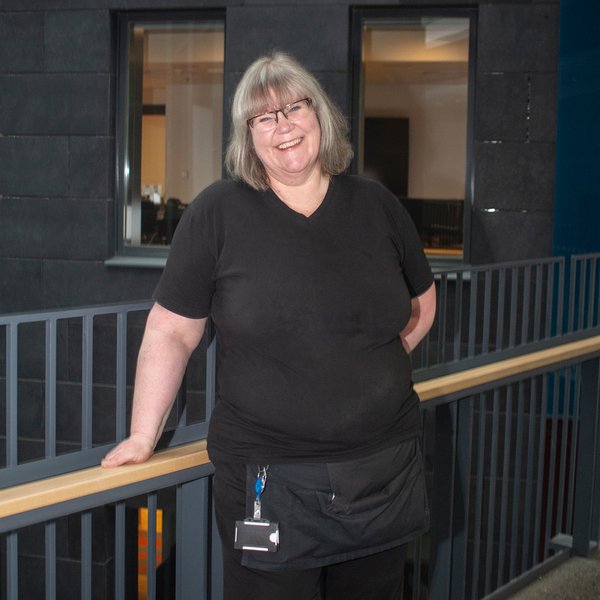 Sigrídur's job entails taking care of the daily management of the premises, communications with contractors who work on maintenance and many other tasks. Sigrídur started her career at the Reykjavik Energy Group in 2002 and has been in property supervision for the past six years. In her free time, Sigrídur often goes to her favourite spot in Borgarfjördur where she has a summer house. There are always plenty of odd jobs that need to be done there, which is where her work experience comes in handy. Sigrídur enjoyed her 15 minutes of fame when a picture of her back appeared in the most read national newspaper. 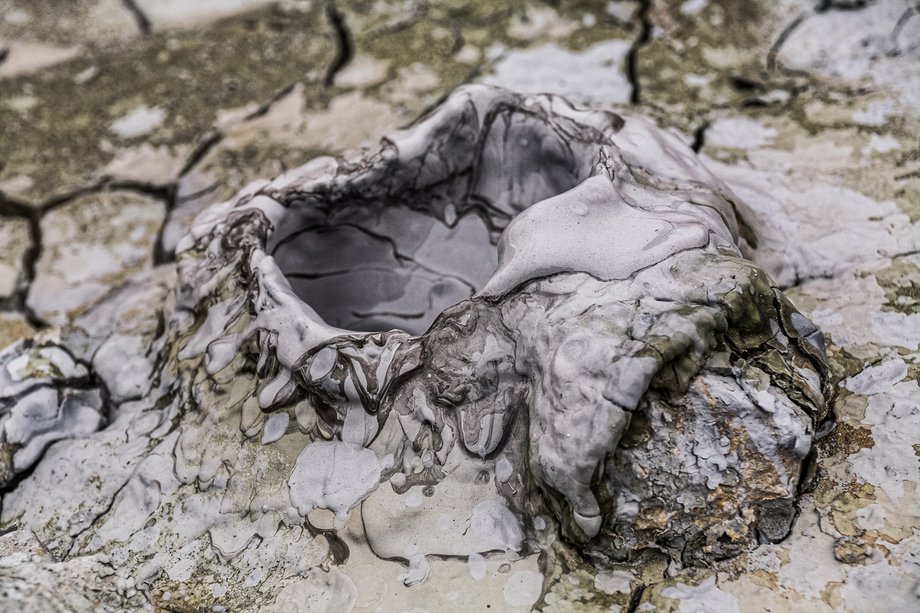 The Electrification of Transport

Transportation is one of the main sources of greenhouse gas emissions in Iceland, in addition to having a negative effect on the quality of air and noise pollution. Reykjavik Energy and its subsidiaries have set themselves the ambitious climate change objective of reducing greenhouse gas emissions by 60% by the year 2030. Because of the nature of their activities they can also have a direct or indirect impact on others’ carbon footprint. ON Power’s development of rapid-charging stations along the national highway and in populated areas has turned electric cars into a viable option for people and businesses. ON Power is at the forefront of developing infrastructure for energy switching in transport in Iceland. A great deal of effort went into its development this year, see graph. At the end of 2018, the fiftieth charging station was opened in Geysir in Haukadalur.

Veitur Utilities, a subsidiary of Reykjavik Energy, is preparing to enable the Internet of Things (IOT) of meters so that it will be possible to have an impact on the usage patterns of charging stations with price management but also by allocating the surplus energy in the system at any given time to the charging station when other usage is low.

The number of electric cars in Iceland and ON Power chargers

Partnerships for the goals

The Reykjavik Energy Group has been at the forefront of innovation and development on climate issues over the past decades. Lower carbon dioxide emissions from the Hellisheidi Geothermal Power Plant using the CarbFix and SulFix reinjection methods and alternative energy in transport are clear examples of that. Collaboration between the business sector and the academic community is more often than not a precondition to enable an idea to develop into a concrete project that can be useful to the business community.

Incentives, such as government grants to businesses and tax concessions, bolster the development of climate-friendly technology. The experience of Reykjavik Energy shows that grants and tax concessions of this kind act as an incentive for staff and partners to take on innovative projects in this field, both domestically and internationally. Examples of projects of this kind that have been launched and show promise, see below and in appendices:

Click here to learn more about how OR supports the U.N.’s SDGs